I (Ansley) had been having contractions (but really far apart) all day on Friday.  At my 40 week appointment I was 3cm dilated.

Friday night we decided to have a family date in downtown Charleston on Saturday.  I sensed I would be a mom of two by Monday.  Along with having fun and making memories I wanted to do some things that would bring my contractions closer together.

I wanted to do sets of stairs, so where better to go than the Customs House?  Myra Grace had lots of fun practicing her stair walking skills.

Our last family portrait before Mackey arrived the next morning. 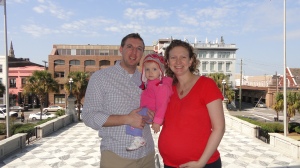 Then we walked to Waterfront Park where Myra Grace ran around and played airplane with daddy.  The F16s were in town doing trial runs all week and Myra Grace has perfected her imitation of them. 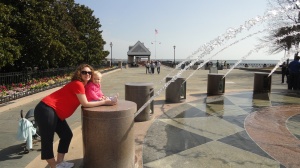 We went to eat seafood at one of our favorite restaurants: Fleet Landing.  On our way driving home we rode down Chalmers Street (the bumpiest cobblestone street in all of downtown) twice.  Then we headed home.  We played outside and then ate dinner together.  A friend of ours was having a birthday party so I decided to go instead of sitting at home and twiddling my thumbs.  During dinner my contractions were getting closer together (maybe it was the yummy Mediterranean food). On the way home I stopped at Target and bought soy milk and apple juice (staples for Myra Grace just in case we weren’t at the hospital the next day).  At that point the contractions were 15 minutes apart.

When I got home I told Brandon I didn’t think we would make it through the night so we decided to try to get a nap in.  I slept off and on in between contractions until 2:45 when they became close enough to start timing (at this point they were 5 minutes apart).  I woke Brandon up at 3:15 because the contractions quickly changed to 3 minutes apart and we called the doctor.  Then we called my mom to come sit at the apartment while Myra Grace slept.

We left the apartment at 3:50 and arrived at the hospital 7 minutes later.  The walk from the apartment door, down some stairs and to the car apparantly had Mackey ready to come because I was pushing on the way to the hospital.  Once we got there we were rushed into a room and the nurses woke up the midwife, realizing Mackey was not going to wait for the doctor.  Three pushes later Mackey was born.  4:29am our little boy was here!